What we do – test

We cost effectively eliminate the need to import and burn fossil fuels such as oil, gas and coal.

We will deliver renewable Gas, Electricity and District Heating through a highly efficient production processes.

Investing in regional development, delivering the benefits of energy security and CO2 reductions to local communities.

One of the key environmental and economic advantages of the gasification process is the production technology is considered carbon negative because, instead of combusting the woodchip it is essentially “baked” in an oxygen starved environment.

What is Biomass Gasification?

As opposed to a traditional biomass plant where the wood is burnt to produce steam to run an electrical turbine, gasification thermally cracks the wood producing a rich syngas.

The Syngas is then put through an upgrading methanation process producing a renewable gas for use in transport and heating. It can be injected into the gas network and trucked off site as it is produced, for delivery to users not on a gas network.

What is a CHP?

Combined Heat and Power (CHP) integrates the production of Power (electricity) and Heat into one single highly efficient process.

The syngas produced from the woodchip is piped to the CHP building where it is used to produce electricity and heat for district heating.

CHP generates electricity whilst also capturing the exhaust heat exchanging it to heat water delivered through a network of pipes to heat towns. This contrasts with conventional ways of generating electricity where the heat is not used to replace oil and gas to heat towns, homes (heating and water), businesses, industry, local community, swimming pools and public buildings.

The Facility will produce renewable gas, heat and electricity using forestry harvest residues in the form of woodchip that will be provided by local and regional suppliers helping to reduce wildfires, improve forest health and increase forest resiliency by cleaning up clear felled sites.

The Facility is planned to operate continuously 24/7, however, given there will be maintenance requirements for the equipment it is anticipated that the gas production equipment and the electricity generator sets (“gensets”) will likely operate between 7,750 and 8,000 hours per year, or approximately 90% capacity. 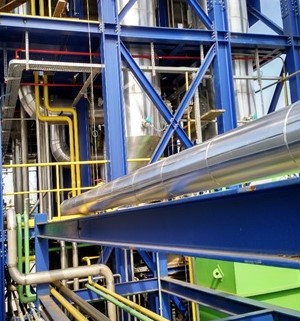 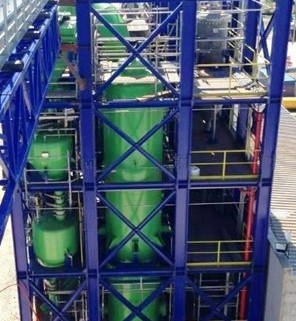 Equipment within gasification building.
This is not a biomass burner

What are the objectives of these projects?